You are here: Home / Knowledge Base / What is Breve? All Your Breve Coffee Questions Answered

Wondering what is breve coffee? Want to learn the difference between a breve and a latte? In this article, you’ll discover everything about this beautiful, creamy espresso drink. 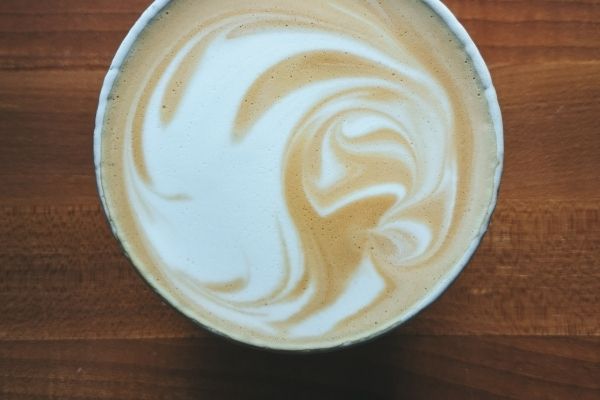 What is a breve

Breve is an espresso-based drink made with espresso and steamed half-and-half instead of milk. This produces a very creamy foam. This drink tends to be much fluffier and sweeter than the average latte prepared with milk.

It’s an Americanized take on the classic Italian latte and it’s simply a latte with half-and-half.

What does breve mean

Breve means “short” or “brief” in Italian. Even though you’ll get a cup that says B for breve milk at Starbucks, it doesn’t mean milk and it’s also not a type of milk.

What is a breve at Starbucks

At most specialty coffee shops when you ask for a breve, you will get an espresso with steamed half-and-half. However, at Starbucks, you will need to specify that you want a Breve Latte (espresso and half-and-half).

The caffeine content varies depending on the size of the drink or more precisely, how many espresso shots are used for the drink. When prepared with a single shot, it will have around 75 mg of caffeine.

This coffee drink is very high in calories. A 12-ounce breve latte has 426 calories and 37 grams of fat!

A tall latte (prepared with regular milk) has only 150 calories. So a breve has 3 times more calories than a traditional latte.

They are both prepared in the same way, but breve lattes are more creamy and fluffier. The drink is also much sweeter than a latte so most people don’t need a sweetener. But it comes with all those extra calories.

Mocha is made with espresso, steamed milk, and chocolate powder or sauce. Both drinks are very sweet and creamy, but mocha also has that beautiful chocolate taste.

They are both prepared with espresso, but these are two completely different drinks. Since it has half-and-half breve is creamy and sweet. Americanos are made by diluting espresso with hot water and there’s no milk in it. You get a cup of black, strong coffee without any creaminess or sweetness.

But, Americanos are very low in calories and have only 10 calories in a 12-ounce serving.

A cortado is made with 2 ounces espresso and 2 ounces flat steamed milk. The milk in cortado tastes “flat” compared to a very rich, foamy latte with half-and-half. The espresso also has a stronger taste because there’s less milk in a cortado.

Flat white is usually prepared with ristretto shots and lightly steamed whole milk. Similar to cortado, this drink has a stronger espresso taste and no foam. A tall flat white has 170 calories and 130 mg of caffeine.

How to make a breve

All you need to make this creamy drink is espresso and half-and-half.

If you don’t have a built-in steamer, you can also heat half-and-half on the stovetop in a small saucepan, being careful not to let it simmer or boil. The ideal temperature is around 150 degrees. Then use a hand frother or a whisk to froth.

Step 1: Pull out an espresso shot, or brew 1 espresso capsule. Pour a shot of espresso into a mug.

Step 2: Steam half-and-half in a steaming pitcher. Angle the pitcher slightly and submerge the steam wand diagonally. Keep the wand below the surface while steaming. Steam until it reaches 140 – 150 degrees F. If you’re new to this, here’s a great guide on how to froth milk with a steam wand.

Step 3: Use the spoon to hold back foam while pouring into the mug with espresso

Step 4: Scoop the foam out on top of your drink

If you don’t have an espresso machine you can use regular coffee, but brew it really strong. Heat half-and-half on the stovetop and froth with hand frother or a whisk. Fill 1/3 of a cup with coffee and slowly pour steamed half-and-half.

Everything you need to know to choose the best coffee for your taste
Is dark roast coffee stronger? Is a home blend better than a breakfast blend? We break it all down in this article.

How much coffee to use per cup?
Use this coffee ratio and make excellent coffee in your own kitchen.

Here’s everything you need to know about Keurig coffee makers
Is Keurig worth it? Which Keurig model is the best? How to clean a Keurig? Get all your answers here.

Learn how to make the best cup of coffee with a French press
Not sure how to use a French press? Here’s everything you need to know.