You are here: Home / Knowledge Base / How Much Caffeine in a Cup of Coffee | A Detailed Guide

Wondering how much caffeine is in a cup of coffee? Looking for an easy way to lower your caffeine intake?

In this article, you’ll discover how much caffeine most popular coffee drinks have. You’ll also learn some easy ways to reduce your daily caffeine intake. 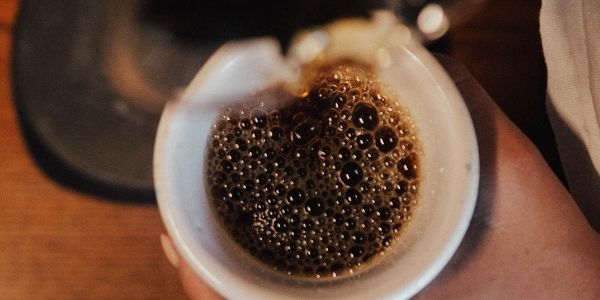 Coffee is the biggest dietary source of caffeine.

An average cup of coffee has about 95 mg of caffeine. But, this amount varies between different coffee drinks.

The caffeine content can vary significantly between different brewing methods, serving sizes, and the type of coffee beans.

Type of coffee beans: Robusta beans contain twice as much caffeine as Arabica beans. Also, decaf coffee will have significantly less caffeine compared to regular coffee (only 7 mg per cup).

Serving size: A cup of coffee can range anywhere from 1 ounce to 24 ounces, and the caffeine content will be different depending on the serving size.

How much caffeine is in a cup of coffee

Also known as regular coffee, brewed coffee is made by pouring hot water over ground coffee beans. One cup of brewed coffee (8 oz) contains about 95 mg of caffeine on average. The caffeine content will vary depending on the drink size:

How much caffeine is in espresso

Espresso is made by forcing a small amount of hot water through finely ground coffee.

Although espresso has more caffeine per volume than regular coffee, it usually contains less per serving, since espresso servings tend to be smaller.

One shot of espresso is generally about 30 ml (1 oz) and contains about 64 mg of caffeine.

Espresso-based drinks
Many popular coffee drinks are made by mixing espresso with varying amounts of milk. These include lattes, cappuccinos, macchiatos, and iced lattes.

Since the milk doesn’t contain any additional caffeine, they have the same amount of caffeine as straight espresso. However, if you want to reduce your caffeine intake, order small. A Starbucks grande Americano has 3 shots of espresso and 192 mg of caffeine, and a small one has one shot and only 65 mg of caffeine. 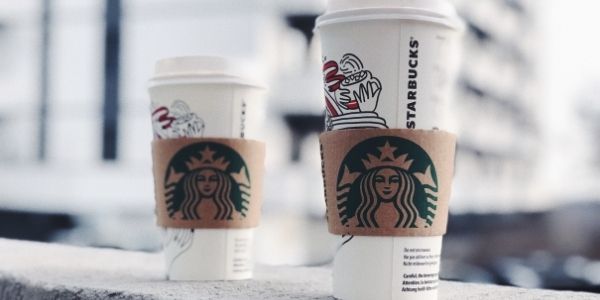 How much caffeine in Starbucks coffee
Brewed coffee caffeine content varies depending on the blend.

That’s correct: grande and venti lattes are made with two shots of espresso, not three or four.

How much caffeine is in a Caramel Macchiato
Like lattes, short and tall macchiatos at Starbucks are made with one espresso shot and have 75mg of caffeine. Grande and venti caramel macchiato has 150 mg of caffeine.

How much caffeine is in Starbucks Americano
Starbucks Americano is made with one to four shots of espresso, depending on the size. It contains the following amounts of caffeine: short 75 mg, tall 150 mg, grande 225 mg, venti 300 mg.

HOW TO LIMIT CAFFEINE AT STARBUCKS

I know that Grande and Venti are popular, but bigger doesn’t always mean better. When you think about it, 8 ounces or 12 ounces is a decent size for a cup of coffee.

When ordering brewed coffee, try to stick to short or tall. There’s enough caffeine to wake you up, but it will help you reduce your daily caffeine intake. A short has 155 mg of caffeine and grande has a double amount – more than 300 mg per serving.

Their decaf brewed coffee is also a great option, especially if you’re sensitive to caffeine. Short has only 15 mg of caffeine, tall 20 mg, grande 25 mg, and venti has 30 mg of caffeine.

When ordering lattes or macchiatos, instead of ordering a grande you can choose tall. The drink will be slightly smaller but it will have only 75 mg per serving.

It’s the same with iced lattes. Choosing tall (12 oz) instead of a grande (16 oz) will half the caffeine amount.

These small changes will help you limit your caffeine intake and they will also have a big impact on your wallet.

HOW TO LIMIT CAFFEINE INTAKE AT HOME

Brew small. Don’t make too much coffee and try to limit the number of cups.

Use less coffee. The Golden ratio is 2 tablespoons per 8 ounces of water, but you can use less if you’re trying to reduce caffeine intake. To make sure your coffee tastes good even if you’re using less coffee, choose dark roasts instead of light roasts.

Switch to decaf. Decaf coffee is not entirely caffeine-free but it still has significantly less caffeine per cup. On average, an 8 ounce cup of decaf coffee contains not more than 7 mg of caffeine.

How much coffee is too much

According to the FDA, up to 400 mg of caffeine a day appears to be safe for most healthy adults. That’s roughly the amount of caffeine in 4 cups of brewed coffee.

Of course, caffeine affects people differently. Some people are more sensitive to caffeine than others. There are also some health issues that require limiting caffeine.

If you want to make a small step, limiting your coffee to one or two cups per day, or switching to decaf can always be a nice change.

Everything you need to know to choose the best coffee for your taste
Is dark roast coffee stronger? Is a home blend better than a breakfast blend? We break it all down in this article.

How much coffee to use per cup?
Use this coffee ratio and make excellent coffee in your own kitchen.

Here’s everything you need to know about Keurig coffee makers
Is Keurig worth it? Which Keurig model is the best? How to clean a Keurig? Get all your answers here.

Learn how to make the best cup of coffee with a French press
Not sure how to use a French press? Here’s everything you need to know.