Turn your regular cup of coffee into a tasteful one, with one simple ingredient – a pinch of cinnamon. 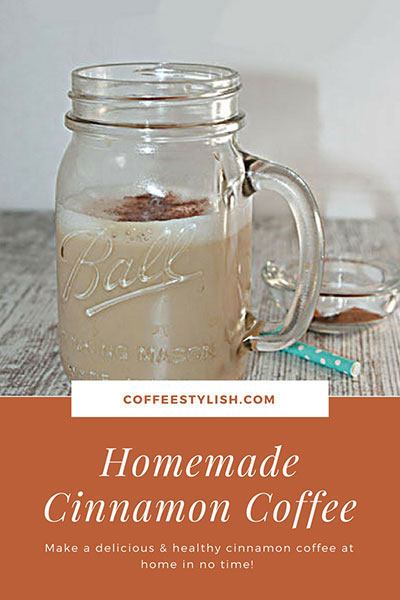 Besides the fact it’s yummy, cinnamon coffee can also have some positive health effects. With its antibacterial, antifungal and antioxidant properties, cinnamon has been shown to be useful for everything, from preventing heart disease to diabetes.

How much cinnamon per cup of coffee?! Try not to use too much. A rich pinch or 1/4 of a teaspoon per cup is perfect.

Directions:
Brew coffee and set aside. Whisk together cinnamon, brown sugar and milk, and heat until steaming. Slowly add this mixture to your coffee while stirring. Optional: garnish with whipped cream and a pinch of cinnamon.

Starbucks is known for its Cinnamon Dolce Latte – a sweet, milky coffee drink made with cinnamon syrup. Here’s how you can make one at home:

Directions:
Brew coffee, add 2 tbsp cinnamon syrup and stir. Heat the milk on the stove or in the microwave and slowly add to your coffee while stirring. Add sugar to taste.

You can also infuse the milk with cinnamon sticks and use it as a creamer. To infuse milk, heat 2 cups milk with 1 cinnamon stick in a medium saucepan over medium heat, just until steaming. Remove from heat, cover pan and let cinnamon stick steep in milk for 1 hour. Strain. You can refrigerate it for up to 3 days. Reheat gently before using.